3 YouTubers Who Collaborated with Make-A-Wish Foundation 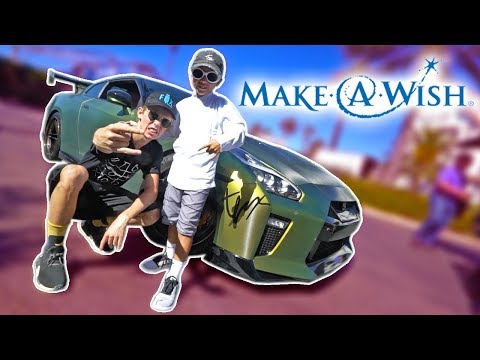 The Make-A-Wish Foundation is a non-profit organization who grants wishes to children battling life-threatening illnesses. Some wishes include: taking a dream vacation with their family, swimming with dolphins, seeing a favorite artist or sports team live, or even meeting famous YouTubers. Make-A-Wish has reached out to several Youtubers such as Jake and Logan Paul, FaZe Clan, Tanner Fox, Guava Juice, and many more about wishes from children. By reaching out, the foundation has been able to fly kids out on an airplane to spend a day with their favorite YouTuber and then most of the time is featured in their video. Make-A-Wish believes that by granting these kids wishes, they can help give them strength and motivation to overcome their illness.

In August 2017, Jake Paul uploaded a video to his Youtube channel titled “I was her make a wish.” In the video, a fan of Jakes named Kaylee chose her Make-A-Wish to meet Jake. Kaylee was then able to spend the day with him and be in his vlog. Kaylee has had cancer in her ankle for over a year now. She has also been watching Jake Paul during her Chemo treatments. Jake learned that even though she went through a leg amputation, she still makes things work and is an active part of her gymnastics team. In the video, Kaylee also mentions how she enjoys making YouTube videos and would like to grow her channel to the size of Jake’s one day. Jake ended up featuring Kaylee’s YouTube channel link in the description of his video. This helped Kaylee gain her first hundred thousand subscribers. At the end of the video, Kaylee said she had an amazing time getting to meet Jake Paul. She was also able to vlog with him which fulfilled her wish.

Also, this past August, Youtube star Tanner Fox received a request from the Make-A-Wish foundation. A child named Braeden said his one wish was to meet Tanner and spend the day with him. Tanner agreed to hang out with Braedan and his family to honor his wish. All of their visit with each other was recorded and uploaded to Tanner’s Youtube channel. Throughout the video, Tanner hands out his merch for free, does backflips on the trampoline with Braeden and his brother, takes them driving in his Nissan GTR, and also goes to the beach. After the day was over, the family was very grateful and thanked Tanner for his time. Braeden also went home with some gifts from Tanner and had an amazing time with one of his favorite YouTubers.

Lastly, a young girl named Tiegan also expressed that her Make-A-Wish was to meet his favorite YouTuber DanTDM. Make-A-Wish reached out to Dan TDM and of course, he agreed to help one of his special fans have her wish granted. Tiegan was one of the eight children with life-threatening illnesses who got to meet Dan TDM on this day. Tiegan has Spinal Muscular Atrophy which causes many struggles and hardships. She found a way to increase her mood which was by watching Dan TDM on YouTube. His videos entertain her and give her tips on how she can improve her gaming skills. Watching his videos makes Tiegan very happy so she was thrilled to meet Dan TDM. She had a wonderful experience put together by the Make-A-Wish Foundation and Dan TDM.

Scare Pewdiepie 2 Not Set For Release, but Logan Paul’s Show is